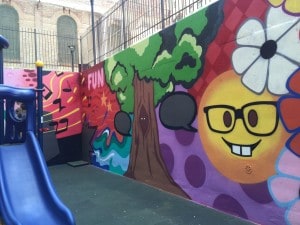 The intoxicating scent of spray paint wafted through the air as an ordinary-looking wall in the Bronx quickly went from a blank slate to a colorful work of art designed for — and by — the very kids who will benefit the most from it.

“The idea of doing something with kids is always appealing to me,” artist John “Crash” Matos told Metro as he shook a spray can during a brief respite from painting during last week’s heat.

Matos and Wilfredo “Bio” Feliciano from Tats Cru, two graffiti artists who have long gone legit after cutting their teeth in New York’s infamous street art scene back in the ’70s and ’80s, have created a vibrant mural in the private playground area of the Barrier Free Living (BFL) Apartments in the Bronx.

The building is a permanent, non-shelter residence for survivors of domestic violence and their families, including 91 children, many of whom attend the in-house child-care center connected to the outdoor playground.

The area’s formerly white wall has been turned into a brightly colored mural with a boom box and music notes, flowers, a glasses-wearing smiley-faced emoji and more.

“It engenders hope, positivity, lightness and color for the kids, who have seen a lot of darkness in their life,” said Scott Hess, director of communications for BFL.

“This will brighten up their day, and it doesn’t seem so secluded or like they’re back in the shelter again,” added GiGi, the president of the building’s tenant advisory board who declined to give her last name. “They’ll see what they wanted on the wall, and it’s very important because they constantly come from where no one listens, so to actually have someone do something and listen, it means their voices are being heard.”

To take that one step further, Matos and Feliciano included a chalkboard-paint area on the wall for the kids to be able to add their own art to the mural. The two are set to begin a second mural behind the BPL Apartments on Monday, which will be inspired by input from its adult residents.

BEAUTIFYING THE BOROUGHS
Matos and Feliciano hooked up with BFL Apartments thanks to 501 (See) Streets, which aims to beautify the five boroughs and beyond with murals done by local artists. The nonprofit is the brainchild of Queens resident Noah Sheroff, who, ironically, “can barely draw a straight line with a ruler.”

The organization was born after Sheroff became “obsessed” with street art, and since doing its first project in 2014 — a series of rolled gates near Yankee Stadium devoted to team greats like Babe Ruth and Lou Gehrig — 501 (See) Streets has done more than 20 interior and exterior murals in and around New York.

“At the very least, (our work) adds some degree of positivity, something different, something unique to look at that breaks up the daily grind,” Sheroff said.

He finds places to do murals simply by reaching out to property owners and management companies; funding generally comes from them, as well as business improvement districts, other nonprofits and even city officials.

While much of the work 501 (See) Streets has done has been welcome additions to many neighborhoods, Sheroff has faced some pushback over the years.

“The spray cans sometimes have a stigma, that they equal urban decay,” he said. “Part of this is shaping what it means to be from an area, which tends to be part of the pushback, that this leads to gentrification — it’s a very odd, fine line I have to walk. But if you experience it, you have a whole different worldview,” Sheroff added.

Sheroff hopes to eventually take 501 (See) Streets national and do more projects in areas like Harlem, the Bronx and Long Island, as well as the organization’s first mural in Staten Island, the only borough it hasn’t worked in yet, but hopes to soon.

For more info about the organization, visit 501seestreets.org.